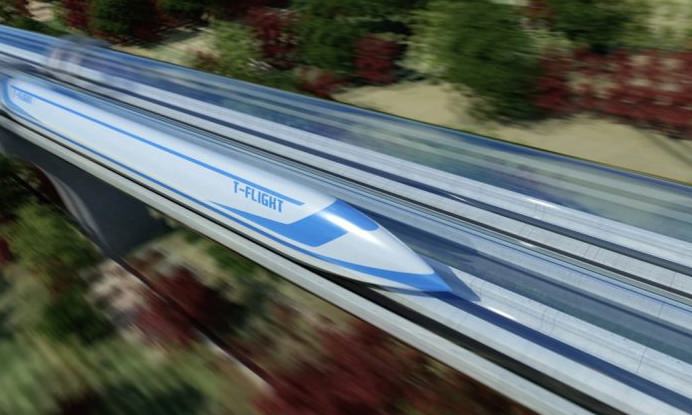 Richard Branson's Virgin Hyperloop made headlines around the world in November 2020 after the first tests with passengers were conducted. But what are the foundations of this innovative means of transport? Let's trace the most important moments in its evolution.
18th and 19th centuries: precursor projects of the hyperloop
Musk's idea of building a superfast alternative to trains, which would travel through a series of low-pressure tubes and be powered by a vacuum and maglev system, is based on studies dating back at least three centuries.
One of the first people to imagine a prototype hyperloop was British inventor George Medhurst in the 18th century. Medhurst, who pioneered the use of compressed air as a means of propulsion, filed a patent for a system that could move goods through a system of pressurised iron tubes in 1799.

20th century: levitating capsules and air cushion technology
In 1909, Goddard wrote an article entitled 'The Limit of Rapid Transit', in which he described a train that would travel from Boston to New York in just 12 minutes. Although it was never built, the design included some of the constituent elements of the hyperloop, such as levitating pods and a vacuum-sealed tube.
After World War II, attempts were made to build a system similar to the hyperloop. These included the Aerotrain, which was developed in France between 1965 and 1977.
Designed by French scientist Jean Bertin, the Aerotrain prototype was similar to a levitation train but relied on air cushions instead of magnetic resistance for propulsion. However, lack of funding, the cost of infrastructure and Bertin's death in 1975 marked the end of the project.
In the 1990s, a team of researchers at the Massachusetts Institute of Technology, led by Professor Ernst Frankel, began to develop a vacuum tube train that would take 45 minutes to travel from New York to Boston. Although a test ring was built, this project too was eventually shelved.
The 2000s: from ET3 to Elon Musk
In the early 2000s, the CEO of the American ET3 Global Alliance consortium, Daryl Oster, designed a maglev train in which pods the size of cars travelled in elevated tubes.
Patented in 1999 through an open consortium model, ET3 stands for Evacuated Tube Transport Technologies, which refers to a 'network of tubes that have removed air to eliminate friction for magnetically levitated, driverless pods'.
While Musk first mentioned the hyperloop in 2012 at an event organised by technology publication PandoDaily, it wasn't until August 2013 that he revealed the first design.
In a 57-page document, Musk detailed how Hyperloop Alpha would consist of enclosed capsules or pods - each containing up to 28 people - moving through a system of tubes on skis that levitate on a cushion of air.
Proposed as a faster, electric alternative to California's high-speed rail, Alpha Hyperloop would connect San Francisco to Los Angeles in 35 minutes and cost $6 billion.
Just as Oster did in 1999, Musk decided not to patent it for himself, but instead registered the project using the open source project model.
2013-2020: the birth of the hyperloop
In the years between 2013 and 2020, a handful of companies - including Virgin Hyperloop and Zeleros - began working on developing the system from Musk's designs.
Formerly known as Hyperloop Technologies and Hyperloop One, Virgin Hyperloop began active work in May 2016, when it successfully carried out its first outdoor test in North Las Vegas. Two months later, the company presented its first feasibility study, showing the positive economic and environmental impact of a potential 500km hyperloop link between Helsinki and Stockholm, reducing travel time between the two Scandinavian capitals to 28 minutes.
After showcasing the project's design around the world and conducting application demonstrations for passengers, Virgin Hyperloop successfully carried out its first passenger test in October 2020, removing the biggest doubt about feasibility and paving the way for the project's next steps.
Gesa Industry closely follows all innovative projects for public transport and has always accompanied the decisive advances in the sector, acting as a reliable partner for the development and construction of new models of train interiors.
Technical and engineering preparation, to keep up with all the technological innovations, are a constant for the company, which pursues the objective of growth in step with innovation in the sector.
Autore:
gesaindustry
Categoria:
Blog